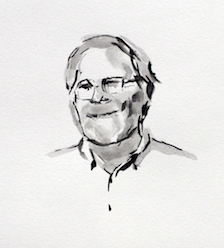 Nicholas Boke is a free-lance writer, international education consultant, and blogger at waitingforthebarbarian.wordpress.com

Now we’ve got another ally.

Still-Legal can’t promise to inject sanity into American politics or reason into American foreign policy. But it can give us a way to remind ourselves—and the people we encounter as we go through our days—that we’re not alone in this business of coping. To say nothing of providing a vehicle for helping some unquestionably just causes. We sure need that reminding. And the causes need our help.

Every day I wake up hoping that the headlines will offer a bit of hope. Every day I’m disappointed. It’s a hard world to live in when the brightest spots in American politics include things like the fact that Donald Trump is beginning to realize that diplomacy and health-care are more complicated than he had thought, or the fact that extreme-extreme right-wing nasty-man Steve Bannon doesn’t have quite the access to the ear of the President of the United States that he had once had.

Oh, that’s not to say that everything’s bleak. The Democratic candidate’s earning 46 percent of the vote in a Kansas Tea-Party congressional district was heartening, to say nothing of progressive Democrat Jon Ossof’s good chance of winning Georgia’s sixth congressional district seat—Newt Gingrich’s old stomping grounds—where voters are casting their ballots as I write this column. As in the Kansas election, the good-guys actually win even if the good-guy doesn’t win, as we terrify the current powers-that-be.

We have to worry, however, that the Syrian cruise missile strike and the fact that North Korea didn’t test a missile during the Day of the Sun celebrations may whet Trump’s taste for military action. He may decide that America First gets him nowhere. Loving being loved as he does, he may decide that domestic legislative politics are just too complicated to bother with, and turn his attention outward, where he can easily be loved as America’s strong man: America’s Putin or Erdogan or Kim Jong Un.

In the meantime, we’ll keep on doing what each of us has found to do, whether that’s marching to get Trump to release his tax returns, petitioning state legislatures to support Planned Parenthood, promoting the work of the ACLU and SPLC and the like, or showing up loaded for bear at Town Hall meetings.

And it’s good that we do these things.

Sure, maybe the FBI or Congress will turn up some really damning evidence of collusion between Trumpsters and Russia. But that’s probably a long way off. And nobody who’s anybody is talking seriously about impeachment yet. And unless he starts wandering the Rose Garden naked, there’s nothing on the horizon that indicates that those empowered to do so are about to invoke the 25th Amendment, transmitting to Congressional leaders “a written declaration that the President is unable to discharge the powers and duties of his office.”

So all we can do is keep on keepin’ on.

And keep on hanging on to hope.

Which, by the way, is Still Legal.

Your Still-Legal! T- Shirts are custom-printed just for YOU when you order them, so refunds or exchanges are available only if you receive a damaged or incorrect item. Please let us know! We want to know as SOON as possible in order to make it right.  Please email service@still-legal.com, or call us in Rhode Island at 401-751-3766. We'll get your replacement or refund handled RIGHT AWAY. Thanks!

Still-Legal! Apparel for the Next Four 2 1/2 Years

A Project of Merlyn’s Pen, Inc.

Creating Programs that Educate Since 1985

Plan to receive your Still-Legal! T-shirts in eight to ten days.* Your shirts are custom-made for you. T-shirts arrive by U.S. Mail First Class. Larger orders may arrive via Priority Mail or UPS.  Thank you!

* Still-Legal! apparel is available only in the US, its territories, and to APO, DPO, and FPO addresses.